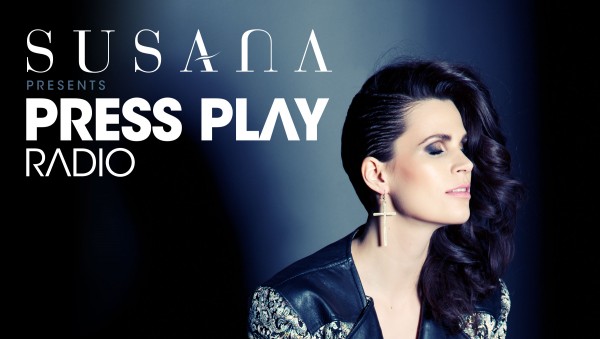 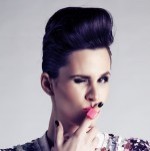 Susana (born April 1984) grew up in the surroundings of Amsterdam (Netherlands) and has had a passion for music ever since she was a little girl. “I don’t know how, but I always knew, even at a young age, that I could sing and I have wanted to become a singer ever since I can remember. My bedroom is basically where it all started. I have spent many hours there, singing along to my dad’s records, teaching myself how to sing by mimicking the singers.” It didn’t take long, however, for her to expand her singing to the outside world. When it was time for her to go to high school she deliberately choose a school that offered a lot of room for developing creative activities. It was in this creative environment that she gained a lot of experience, participating in school plays, Christmas shows and so called “lunch concerts” during lunch breaks. It was also there that she got in touch with a few fellow students with an alternative/rock band – named “010? after the classroom where they used to rehearse. They were looking for a lead singer and the choice was easily made. Her time in “010? gave her the chance to develop her lyric writing as well has her performance skills. In the meantime, 15 years old by that time, she had also begun taking professional singing lessons with conservatory schooled opera singer Kirsten Schotteldreier, who worked a lot on jazz and classical techniques with Susana as well.

Thus, by the time Susana graduated high school she had created a pretty diverse musical background. Nonetheless, she had never really explored electronic dance music (EDM) before. This changed when a neighbor of her family, who was impressed after having seen her perform with her band, introduced her to Raz Nitzan and Adrian Broekhuyse, two producers with an extensive track record in the realm of EDM, especially in trance music. Not long after they were introduced to each other in 2003 they recorded “Dark Side of the Moon”, in collaboration with Ernesto vs Bastian. Susana’s first ever trance collaboration turned out to be a success in the scene and eventually led her to work with Armin van Buuren. Susana provided the vocals for “Shivers”, one of Armin van Buuren’s biggest hits to date, which was released in 2005. Susana regarding her first steps on the dance scene: “Despite my diverse musical background and my interest in different genres I had never really explored dance music. But once I got involved with it a whole new world opened up to me and it didn’t take long before I got really passionate about it. There is just a certain emotional energy to it that really touches me.”

Ever since these first two releases in 2005 Susana’s career has grown steadily. She has a powerful and emotional yet quite unique sound and it therefore didn’t take long for her to become a hot topic in the dance scene, resulting in follow-up collaborations with Ernesto vs Bastian (“Stranger in Paradise”) and Armin van Buuren (“If You Should Go”) as well as collaborations with various other talented producers and DJ’s. Also, performing live in different parts of the world, as she did for example with the Armin Only “Imagine” tour in 2008, has really pushed Susana’s career. As can be read on the Armada website: “Her  strong on-stage personality and live performance make her a beloved artist to have or see on stage.”

Another highlight of her career was her collaboration with producer Rex Mundi, which resulted in the release of “Nothing at All” in 2009. It was Markus Schulz, one of Susana’s favorite DJ’s, that had received the instrumental from Rex Mundi and immediately thought of Susana’s voice as a perfect match for the track. “Nothing at All”, with its deep sound and dark edge, was a huge success and made it to #15 in the ‘2009 A State of Trance End of Year Vote’. Susana has a special place in her heart for this track: “The moment I heard the instrumental of “Nothing at All” I was really overwhelmed by the deep and dark sound of it and, even though this might sound strange, I really felt like this track was meant for me. I felt an immediate connection to the track. And not only did its success give another huge impulse to my career, it also made me realize more than ever my passion for progressive trance”.

The journey Susana started out on back in 2003, exploring the realm of EDM, has eventually led her to become the first trance vocalist to be signed as a solo artist to Armada Music – the label of Armin van Buuren. In May 2010 her debut album “Closer” was released. “Closer” has the format of a compilation album for which Susana worked with a lot of big names like Dash Berlin, Josh Gabriel, Jorn van Deynhoven, Tenishia and many others. The first single, Closer (after which the album was named), is a collaboration with Omnia & The Blizzard and has been played many times in clubs around the globe by DJs like Armin van Buuren, Markus Schulz and Andy Moor.

The release of her debut album is not the only development that made 2010 an important year for Susana. In June Markus Schulz’ new album “Do You Dream?” was released including the track “Unsaid” featuring the vocals of Susana. She also provided vocals for Armin van Buuren’s new artist album “Mirage”. On their intro track “Desiderium 207” people can hear a different side of Susana’s voice as she shows her versatility with haunting classical vocals that add to the dramatic feel of the opening of Armin’s new album. She was therefore also part of the second Armin Only tour, the “Mirage” tour, which saw its kick off in Utrecht (Netherlands) on November 13th 2010 and then continued on to countries like Russia, Argentina, Australia, Lebanon and Poland in 2011. Not only did Susana perform “Desiderium 207” as part of a dramatic opening of the show, but also “Closer”, “Orbion” and “Shivers”.

In the meantime the success of “Closer” led to the release of a “Closer – The Remixes” album on Armada Music during the summer of 2011. Around that same time Susana herself entered the studio to start working on new material for a follow-up album. And with success; her sophomore album “Brave” was released in May 2012 including collabs with Max Graham, Shogun, Beat Service, Rex Mundi and Daniel Kandi.

The last two years have seen Susana tour extensively, visiting places all over the world including Ukraine, Egypt, Lebanon, Russia, Bahrein, Malta, Taiwan, Argentina, Israel and more. As well as that Susana is one of the first vocalists to ever perform a live acoustic session at an EDM festival when she joined Eller van Buuren and his band at Electronic Family festival in Holland performing tracks such as Shivers, Closer and Brave.