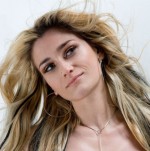 Nadia Bonifacio, alias Anthya, was born in MIlan, Italy, where she lives and works. She began studying singing and music in 2000, following her passion for John Lennon and the Beatles. Since 2002 she has worked in recording studios in MIlan as a vocalist and composer, where shea also began to meet various musicians and she recorded her first single called "Razza Bastarda" in 2005 for Riverrecords. Her work oh her songs allowed her to meet DJ and producer Alex Barlett and she subsequently began a close working relationship with trance music. Working as a composer and singer with Alex Barlett in 2007, she wrote his new single "Universe Inside". Some of his projects as a singer and songwriter of melody vocals are"Touch the Sun", "Heaven", "Off he World", "Devotion", "Enchanted", "High", "Let it Flow", "My Angel", "In the End", "Floating Beyond", "Losing Gravity", "Light to Lies" and "Tonight"