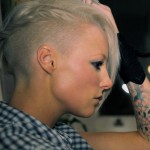 Few voices are as instantly recognizable as that of Australian born songstress, Emma Hewitt. Hewitt’s haunting melodies, yearning lyrics and distinctive style have earned her a legion of passionate fans around the world as she continues to write and release music with some of the world’s most respected names in electronic dance music.

Although Emma Hewitt had a musical background in rock music, she released her debut single in 2007 in the field of progressive house. "Carry Me Away" was a collaboration with British DJ Chris Lake. The single was a total of 50 weeks in the Billboard Hot Dance Airplay charts in the United States and reached number 1 in December 2007.

After the success of her first single, she has worked with several trance artists such as Armin van Buuren, Dash Berlin, Cosmic Gate, Gareth Emery, and BT. The single "Waiting", which she published with Dash Berlin in 2009, was ranked 25th in the Belgian singles chart and #1 on the Global Trance Charts. In Armin van Buuren's popular radio show A State of Trance the single was elected by the audience with 2109 votes to the second best song of the year 2009. She was nominated twice in the category Best Trance Track with "Waiting" and "Not Enough Time".