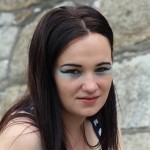 Prolific Singer Song-Writer Emma Lock hit the Trance scene in 2010, wowing Electronic Dance Music lovers with her angelic divine Vocals, infectious Melodies and flawless Lyrics.
‘Save Me’ smashed into the #1 slot on Beatport and Audio Jelly Charts, bringing together the creative energy of Emma Lock as featured vocalist and co-writer alongside DJ/Producer Andrew Chen aka DJ Shogun.Signed to Armada Music, and heavily supported by Armin Van Buuren on ‘A State of Trance Radio’, ‘Save Me’ was voted in as future favoured and topped the charts for 5 weeks whilst Trance lovers and clubbers around the world united, raising their hands and singing along in support.
With 18 releases since 2010 Emma Lock has worked with a number of established and upcoming DJ’s andproducers. Tracks like ‘Hiding to Nothing’ were included on the ‘In Trance We Trust CD 2010′ and ‘Cut and Run’, also with Beat Service, was personally chosen to go on ‘A State of Trance 2010′ by Armin Van Burren. To date, track collaborations with Emma Lock feature on over 80 compilations!