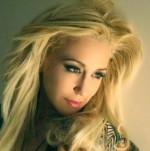 Jes Brieden, better known by her stage and artist name JES, is a singer, songwriter, DJ and producer. Born and raised in New York City, she studied art and singing in an art school. She first began experimenting with music production at her friends' studios. By age 16 she made her first vocal recordings as a reference vocalist, and was also working as a backup singer for several major recording labels After JES answered an ad in the newspaper called The Village Voice when she was still a teenager, she recorded her first song. At the time, she sang in various bands.

n 2001, while she was working at a recording studio in LA, JES met Mike Olson, and the two formed Guardians of the Earth. Songs they produced include "Star Children" and "One Moon Circling". "Star Children" was included on Paul van Dyk's 2001 Ministry of Sound compilation The Politics of Dancing. Inspired by this new voice of herself, she began working with more DJs and producers and went on to form Motorcycle with Gabriel & Dresden and performed the vocals on the instant club hit and Billboard No.1, "As The Rush Comes".

JES' most well known works were created with Josh Gabriel and Dave Dresden, known as Gabriel & Dresden. They formed the group Motorcycle, and its 2003 hit "As the Rush Comes" was a number one single on Billboard's Hot Dance Airplay chart in 2004, where it also became the first year-end number one Dance Airplay track of the same year. "As The Rush Comes" gave JES international exposure, which then allowed her to perform in larger venues and festivals such as the Bacardi Festival (Lebanon), Fresh (Malta), World Electronic Music Festival (Toronto), Escape In The Park (United Kingdom), Los Angeles Memorial Sports Arena, and Red Rocks Amphitheatre (Denver). JES had performed on the United Kingdom's "Top of The Pops" TV show alongside Beyonce and Maroon 5. Motorcycle released a new song called Deep Breath Love. A mash-up by Dave Dresden with Sedna by 16 Bit Lolita's was included on Sharam's prestigious Global Underground 029: Dubai.

Since meeting Tiesto, JES signed with his record label, Black Hole Recordings, and released her first solo album Disconnect. She also was featured on Tiesto’s artist album Elements of Life with the song "Everything" and continued to perform as the opening artist for the Tiesto Worldwide Tour of Elements of Life. Jes has also collaborated with DJs like D:Fuse, Deepsky, and Solar Stone, producing tracks like "Living the Dream", "Ghost", and "Like a Waterfall". The last appears on the internationally acclaimed DJ Tiesto's In Search of Sunrise 4; her song "People Will Go" appears on In Search of Sunrise 5, "Imagination" and "High Glow" (the latter credited as TaxiGirl) on In Search of Sunrise 6, and an acoustic version of "Imagination" on Gabriel & Dresden's album Bloom.

JES wrote and released a remix album, Into the Dawn (The Hits Disconnected), with Black Hole Recordings in January 2008, followed by an album called High Glow, supported by performances on Tiesto's Elements of Life World Tour. Her songs "One Moon Circling" and "Talk Like a Stranger" were recently covered by Mark Norman on his album Colours.