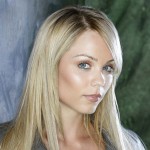 24 year old Singing beauty Laura Vasiliou, best known as Laura V from Surrey, has lived and breathed music all her life. She grew up watching her mother, The West End star Terri Stevens, whom she describes as her biggest influence and inspiration as she performed to audiences across the country and stateside. She spent the early years of her life with her family in various recording studios. Laura’s earliest memories are of her parent’s song writing. This rubbed off on Laura who amazed people with her talents by writing and recording her first song “Where has he gone” at the age of nine.

Laura signed to her first manager at the early age of 13, by which she had begun song writing and performing with her brother Jack, who still produces and writes music for Laura till this very day. She left school at the age of 16 to pursue music full time entering a development deal that enabled her to grow as an artist and writer. Laura met and impressed some amazing people whilst traveling and working with American writers and producers. However she had not yet found a platform to output her music.

In 2006 Laura featured on the chart topping smash hit single “Changes” by Chris Lake. This was an exciting time, it was the first time she had heard her vocals on the radio. The single was a huge success, it was play listed on radio BBC radio 1 and remained at the top of the charts for four consecutive weeks. Laura flew to Ibiza to deliver a mind blowing performance of the hit song to a huge audience on the Pete Tongs Radio 1 show “Cafe Mambo.

Laura dedicated her life to writing, recording and performing gigs up and down the country. She was huge on the dance scene & had a good underground following that continue to support her today. She has featured on Armin van Burren’s album Mirage with the song Drowning that was written by Super duo mim and Liv Nervo, of Kelly Rowland’s smash hit When Love Takes Over, along side David Guetta.

Laura has performed as a backing vocalist in massive venues like the 02 Arena for artists such as Razorlight and singing at big events such as Redkin. In 2009 she performed backing vocals on the X-factor for the likes of Queen and Mariah Carey. It was watching singers such as Mariah, who her sound is often compared to, that gave Laura the extra push to follow her dreams of being in front of a huge audience.

Laura and her brother Jack recently co-wrote, Mercy On Me, one of Peter Andre’s favorite songs featured on his brand new Album “Accelerate”.

Laura feels music is a way of expressing herself; everything she writes is meaningful and close to her heart. Her lyrics are what make her the unique artist that she is today.