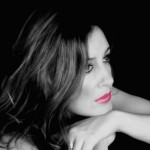 Tiff Lacey is an English singer, songwriter, author and painter. She is the vocalist behind a multitude of Electronic dance music singles. Best known for her international hits with German producer Andre Tanneberger aka ATB and for her work with British producer Don Jackson aka Headstrong, Matt Darey and Cosmic Gate. Sometimes referred to as the "Lady of Trance", Tiff Lacey is the performer with the highest number of officially released collaborations within the EDM genres so far, mostly due to her vocal flexibility, prolific songwriting skills and her being an independent artist.