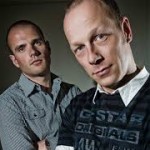 Rank 1 is a Dutch trance group, formed in the Netherlands in 1997. Widely regarded as one of the originators of the Dutch trance sound, the group have produced a number of dancefloor hits since their conception. Although the two members of the group (Benno De Goeij and Piet Bervoets) had worked together before, Rank 1 (a name first used in 1999) was their first project with commercial success.