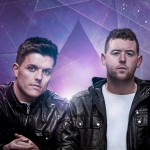 In a scene full of emerging talent and rising stars, all too few make the transition to industry heavyweights. Hard work, creativity and a unique sound are essential for this progression, and the blueprint of that is Solis & Sean Truby. Loud and proud from the North East of England, this duo have gained support in the last few years from the most important names in EDM, and their stock is going nowhere but up.
Whilst their DJ sets are high-energy, sought after shows, it's the production side of the business that has put them on a level above the rest. Hallmarking their idea of trance back 2011 with their chart topping track ‘Empathy’ which featured on BBC Radio One, the pair have consistently delivered productions that sound out at club nights across the world. The likes of ‘Closer To The Earth’ and ‘Loaded’ established them as highly respected producers.
Mixing business and pleasure, the pair are also responsible for the signings of leading record label Infrasonic (described by Armin van Buuren as "one of the best labels in the world right now"), in addition to working closely with Armada, Spinnin and Garuda, where they have released highly acclaimed original and remix material.
Garuda favourite Ben Gold has really been taken aback by what he has seen, playlisting 'Meerkat' on The Sound of Garuda 2 CD, as well as firing out their two new productions 'Sectioned' and 'Code Breaker', along with their monumental remix of Ben Gold's 'Amplified' all in one set on the biggest stage of them all: ASOT 650.
On the gig front in 2013 the pair performed on sought after shows such as the Garuda UK tour, Warehouse Project Manchester, and also making their Ibiza debut at Judgement Fridays, where they first spun their remix of Mauro Picotto’s ‘Lizard’ – arguably one of the year’s best supported remixes.
With solid foundations already in place, 2014 is set to be the pairings breakthrough year. This duo may be proudly from the North East, but with a sound that is played all around the world, these two are by no means regional up-and-comers; they are global stars in the making.