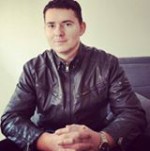 TrancEye was born in 1984 in Poland. From the very beginning he was keen on dance music. Within years 1999-2000 he fall in love with trance. The most inspirational name for him was Ferry Corsten, who is his hero since then. In year 2001 he was introduced into music software. Abilities which the soft provided, made him try himself. Even though the first steps were not so easy - he was too determined to cancel. In 2008 he succeeded in releasing his first fully professional tune in Dutch Label. It meant a lot for him.What's more, it was the biggest encouragement he could even imagine. He decided to go on and strenght up his self-belief.