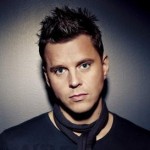 He’s written for the likes of Tiësto, BT, Armin Van Buuren and Benny Benassi and is one of the most in demand lyricists and vocalists in dance music. As one third of multi-million selling Brit band BBMak he conquered the UK Top 40 and the US Billboard Top 100. Now, the spotlight is set to turn on Christian Burns once again as he prepares to release his long player ‘Simple Modern Answers’ on Armada Music.

The writing was on the wall for Christian to be involved in music in some form from an early age. Christian’s father was part of The Signs, a UK band paying their dues at the same time as The Beatles and signed to Decca Records. “I always remember the house being engulfed with music as a child”, Christian said. “Me and my dad built a makeshift studio at the bottom of our garden with a four-track tape machine. I was always in there. I was fascinated by the whole process of making music.”

It was a sonic love affair that was to reach dizzying heights early on, when Burns formed BBMak with fellow singer/songwriters Mark Barry and Stephen McNally. Their first single ‘Back Here’ soared to the top of the American radio charts, hit the #1 spot in Japan and scooped countless awards including ‘Song Of The Year’ from ASCAP and ‘Most Played Song Of The Year’ from PRS. Going on to sell over 3 million records worldwide, Christian took to touring the world, performed on national TV, gracing the covers of magazines and became a certified teenage pin-up and not least, a household name.

Post-BBMak era, Christian headed back to the studio, albeit now in LA rather than his dad’s back garden. It was here, on a random demo, that he heard the blend of rock and electronic for the very first time. “It was ‘Somebody Told Me’ by The Killers. I was completely hooked on the sound, the use of synthesizers in a rock song.” Experimenting with synths back in the UK, his early work with The Bleach Works collective caught the attention of arguably the world’s biggest electronic artist, Tiësto. The Dutch icon asked Christian if he could remix of one of his tracks but Christian declined and offered to write a song with Tiësto instead. “He sent me a backing track that instantly inspired me and in minutes I was able to write a song.” The track, ‘In The Dark’, became the lead single from Tiësto’s Grammy-nominated album ‘Elements of Life’, scored over 5 million hits on YouTube and saw Christian join Tiësto on a massive world tour, introducing him in one fell swoop to some of the planet’s finest dance producers.

From that moment on the collaborations and hits began to pour in. Working with electronic giant BT, Christian co-wrote and sang on three tracks from Grammy-nominated long player ‘These Hopeful Machines’ – ‘The Emergency’, ‘Forget Me’ and lead track ‘Suddenly’. Teaming up with Armin van Buuren on his ‘Mirage’ album, Christian wrote the #1 smash hit ‘This Light Between Us’, touring with the record-breaking five-time winner of DJ Mag’s Top 100 DJ Chart across 2010 and 2011 while still finding the time to write and perform ‘Love and Motion from Benny Benassi’s ‘Rock N Rave’ album.

Now Christian is ready to rewrite the dance music rulebook with his upcoming album ‘Simple Modern Answers’. Working with the cream of the electronic crop, the co-production credits read like a who’s who of EDM; from Armin, Paul van Dyk and BT to Ferry Corsten, Paul Oakenfold, Kryder, Marco V, Scumfrog, Maison & Dragen to Chicane, Conjure One, Michael Woods, Kryder, Jes Brieden, Alex M.O.R.P.H, Jean Claude Ades, Stefan Dabruck, Antillas and Paul Harris & Vern. With Christian Burns on the songbook and behind the microphone this stellar cast has been brought together to create a truly incredible piece of music. In an industry where vocalists and songwriters remain almost entirely in the background, for not the first time, the spotlight will be shining squarely in his direction.