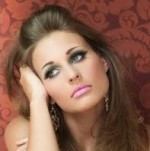 Lucy Saunders is an aspiring vocalist from London. At the age of 16 Lucy recorded her first pop perfect album with a Japanese record label. She later had success in the modelling industry working for a London based agency and also continued to work as a session vocalist which is how she came to meet Gareth Emery. Lucy recorded the demo for 'Sanctuary' and was later asked to feature on the album with a second track called 'Fight The Sunrise' for Gareth's debut album 'Northern Lights.'

Their first single 'Sanctuary' hit Number One on US iTunes and on Beatport download charts, knocking Armin Van Burren's new single out of the way.

With 'Fight the Sunrise' set to be the 2nd single, Lucy has got a lot to look forward to.