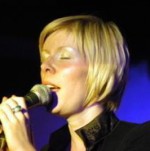 Zoe Johnston was born in Nottingham, England in 1976. Her upbringing was unusual in that she lived with members of her extended family as well as her own father, mother and sister from the age of eight upwards. The household was comprised of ten people, six of whom were children.
Zoe showed early promise in writing and drawing. From the age of 14 she was frequently commissioned to create incredibly detailed, realist portraits in oil and acrylic. She excelled in art and English at school and went on to achieve top grades in these subjects at college and then at Cardiff University, where she studied journalism, film and broadcasting while considering a career in television.
Upon leaving, she taught literacy on a deprived estate for almost a year whilst working on her own music at home. She wrote with a guitar and a small tape recorder until a friend helped her record an e.p. entitled ‘Balloon Woods’ at his small studio which was then distributed locally.
At this time she met Simon White, who was looking for a vocalist to feature on a house album he was putting together with a collaborator under the title of Neon Heights. Zoe wrote and sang on a number of the tracks which were then released on the album ‘A View From The Heights’ to glowing reviews.
While she was recording, Zoe got back in touch with an old friend, Simon Mills, who along with Nail Tolliday had just signed a record deal with Ministry of Sound. The two of them fell in love with her roughly produced e.p. and asked her to sing on the debut album they had started to put together. Zoe took her song ‘Private Road’ to the first session and the empty acoustic original morphed into the beautiful, full and aching version which Bent then released on their critically acclaimed album, ‘Programmed to Love’. Zoe is also the voice on what has arguably become their most loved and celebrated song, ‘Swollen’, which features on the same album. Timeless and deeply touching, it was instantly snapped up by numerous different TV and radio outlets internationally and described by many British reviewers as ‘the song of the summer’ in 2000.
It was ‘Swollen’ which reached the ears of Rollo Armstrong during that same year, when he was looking for new vocalists to record with his multi-platinum selling dance act, Faithless. Initially Rollo believed that Zoe’s voice had been sampled by Bent from vinyl decades old and he made the assumption that she was probably dead. Upon discovering her existence and whereabouts, he invited her for a trial recording session which then led to Zoe becoming the lead vocalist on the album ‘Outrospective’. She sang on tour with Faithless for 18 months internationally and the album sold well over a million copies worldwide.

Zoe has also recorded two songs with the Beautiful South frontman Paul Heaton, the latest of which is due for release in the autumn of 2008. She features on three separate albums produced by the highly successful Canadian band Delerium. UK trance act Above and Beyond have also enjoyed success with both the tracks Zoe wrote and performed with them.

Her debut album entitled ‘Happenstances’ is a collection of recordings created over a number of years while Zoe was writing and touring with other artists. The songs are bare and intimate, often recorded at night while other people in her house were sleeping, and full of the most personal, candid reflections.